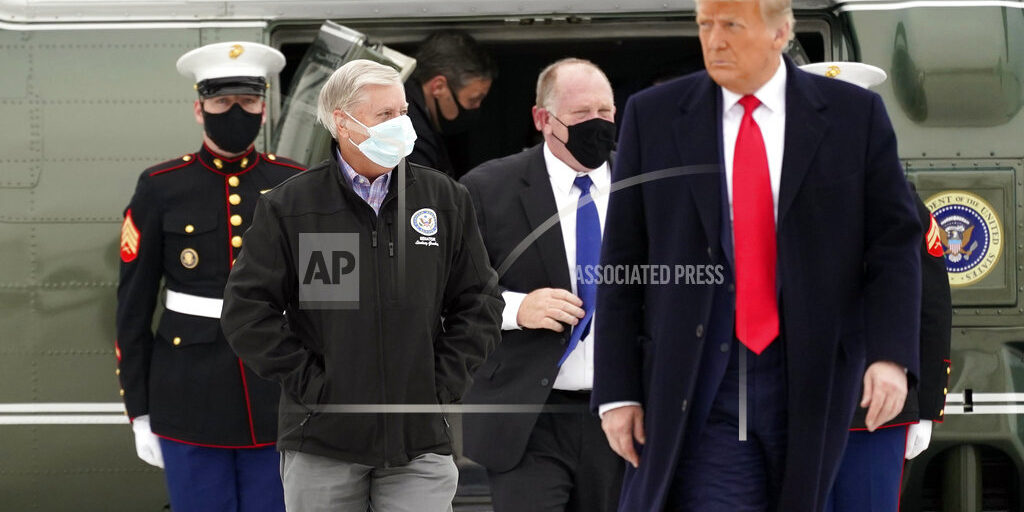 WASHINGTON (AP) — The Latest on the fallout from the attack of the U.S. Capitol by pro-Trump loyalists (all times local):

Republican Sen. Lindsey Graham of South Carolina says the impeachment effort being pushed by House Democrats could “do great damage to the institutions of government” and he’s warning his GOP colleagues not to support it.

Graham is a frequent ally of President Donald Trump. Last week, Graham condemned the violent mob of the president’s supporters who invaded the Capitol. After that siege and after Trump had pushed the unconstitutional argument that Vice President Mike Pence could overturn the election results, Graham said to count him out and that “enough is enough.”

Still, Graham has stayed in touch with the increasingly isolated president.

And Graham’s message to fellow Republicans on impeachment is that those “who legitimize this process, you are doing great damage not only to the country, the future of the presidency, but also to the party.”

He says the millions of people who have supported Trump and his agenda “should not be demonized because of the despicable actions of a seditious mob.”

At least five GOP House members have said they will support impeachment, and two Republican senators have called on Trump to resign. Another GOP senator has said he will take a look at the articles of impeachment when they are sent to the Senate.

HERE’S WHAT YOU NEED TO KNOW ABOUT THE FALLOUT FROM THE RIOTING AT THE CAPITOL:

The House plans the unprecedented vote Wednesday to impeach President Donald Trump for a second time. The move comes one week after he encouraged a mob of loyalists to “fight like hell” against election results and the Capitol became the target of a deadly siege.

— House on verge of 2nd impeachment of Trump

—FBI says it warned of prospect of violence ahead of riots

—Safest place in Washington no more: A reporter’s disbelief

The debate is heated almost from the start as the House sets up a vote to impeach President Donald Trump.

Democrats and a few Republicans say Trump must be removed immediately after he egged on a violent mob of supporters a week ago who then stormed the Capitol. The insurrection happened as some of Trump’s GOP allies were challenging his election defeat, echoing the president’s false claims that there was widespread fraud in his loss to Democrat Joe Biden.

Most Republicans are saying impeachment is divisive. They’re not mentioning the president.

Republican Rep. Jim Jordan of Ohio is one of Trump’s most vocal defenders. Jordan blames Democrats for objecting to previous election results and he’s repeating baseless claims that the 2020 election was rigged.

But Democratic Rep. Jim McGovern of Massachusetts says Democrats haven’t pushed conspiracy theories that a president won in a landslide when he actually lost — which is what happened to Trump.

McGovern is looking back at the deadly Capitol siege and saying “people died because of the big lies that were being told.” And he says that’s enough to merit impeachment.

Democratic lawmakers have opened the historic impeachment effort in the House by saying that every moment Donald Trump is in the White House the nation is in danger.

Rep. Jim McGovern, D-Mass., says the debate is taking place at an “actual crime scene and we wouldn’t be here if it were not for the president of the United States.”

The House is considering impeaching Trump for the second time after last week’s riots at the Capitol as lawmakers met to certify the election results. McGovern says it was Trump and his allies who were stoking the anger of the violent mob.

He says Trump told the crowd to march to the Capitol and “the signal was unmistakable.”

Republican Rep. Tom Cole of Oklahoma said Jan. 6th would live in his memory as the darkest day of his service in the House. But Cole says the Senate could not even begin to consider impeachment until after President-elect Joe Biden is sworn in.

He says he can think of no action the House can take that would further divide the American people than the actions being taken Wednesday. He says “it’s unfortunate that a path to support healing is not the path the majority has chosen today.”

As the House opens its impeachment hearing, the District of Columbia National Guard says it has been authorized to arm troops assigned to security duty on the U.S. Capitol grounds.

The Guard said in a statement that the authority was requested by federal authorities and approved by Army Secretary Ryan McCarthy as of approximately 6 p.m. Tuesday.

Up to 15,000 Guard members are expected to be on duty in coming days in the district to support law enforcement in connection with the Jan. 20 inauguration of President-elect Joe Biden. Authorities are concerned about threats of violence, following the insurrection at the Capitol last week.

The House has opened its proceedings Wednesday, poised to impeach President Donald Trump for a second time exactly a week after his supporters stormed the Capitol to protest his election defeat.

At least five Republicans have said they will join Democrats in voting to remove Trump from office. The article of impeachment charges the president with “incitement of insurrection.”

The House chaplain opened the session with a prayer for “seizing the scales of justice from the jaws of mob-ocracy.”

A vote is expected by the end of the day.

The House is set to vote Wednesday afternoon on impeaching Trump for a second time, accusing him of rallying a violent mob of supporters to attack the U.S. Capitol last week. If that isn’t an impeachable offense, Kinzinger said, “I don’t know what is.”

Several other Republicans are backing impeachment, including No. 3 GOP leader Liz Cheney.

“This is one of these moments that transcends politics,” the Illinois lawmaker told “CBS This Morning” in an interview ahead of the vote.

Besides Kinzinger and Cheney, other Republicans backing impeachment are John Katko of New York, Fred Upton of Michigan and Jaime Herrera Beutler of Washington.

Kinzinger wouldn’t say how many more GOP lawmakers might vote to impeach, but said, “there’ll be more than the five you’ve seen so far.”