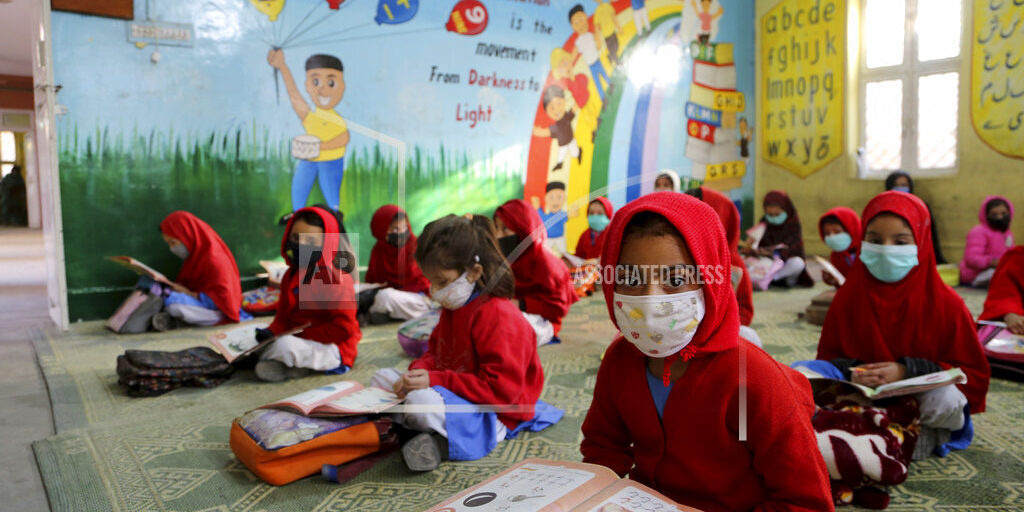 “We’ve got to get the whole world vaccinated,” Fauci told reporters Monday during the International AIDS Society’s COVID-19 conference. “If we don’t get a global effort, without a doubt, this is not going to go away.”

Vaccine supply greatly lags demand, and access has been uneven around the world. Recent results on two candidate vaccines suggest they may work less well against some virus variants, especially one first detected in South Africa, but they are still extremely good at preventing serious illness or death, Fauci said.

The impact of vaccines on the pandemic depends not just on how well they work but how quickly and completely they’re distributed, he added. Vaccines and public health measures such as wearing masks, keeping social distance, avoiding crowds and washing hands are the best way to prevent more cases and further mutations of the virus, he and other experts at the conference said.

— Even if schools reopen by late April, millions of students, many of them minorities in urban areas, may be left out

ANCHORAGE, Alaska — Alaska health officials have asked people who prematurely signed up for vaccine appointments to cancel them.

Anchorage Daily News reports about 500 people in Anchorage who registered to receive vaccines at the city’s mass vaccination site were ineligible because of their age or occupation.

Anchorage Health Department Director Heather Harris says those who are ineligible for vaccinations were asked to cancel their appointments or verify their eligibility in an email. Without verification, the appointments will be canceled on Monday.

Also, differences in coronavirus vaccine eligibility between Alaska’s state and tribal systems have resulted in frustration among some who are waiting to receive the shots.

The organization began by prioritizing older Alaska Natives but the organization recently allowed household members of its customer-owners and employees to be vaccinated regardless of age or race.

Some teachers, people with underlying conditions and others awaiting shots from the state government are upset about the discrepancy.

Health Secretary Carlos Mellado said the new policy will be in effect for the next four weeks.

The U.S. territory already has vaccinated more than 250,000 people, starting with medical workers and then emergency workers.

The Health Department also put a halt to vaccinations for the U.S. territory’s elections commission, saying it had not been authorized.

“We are not going to tolerate people jumping ahead,” Health Secretary Carlos Mellado said in a statement. “Our elderly adults are our priority.”

The department said vaccination of emergency responders will resume once the elderly have received their shots.

Puerto Rico has reported more than 156,000 confirmed and suspected coronavirus infections and more than 1,800 deaths.

ROME — Much of Italy is gingerly reopening from pre-Christmas coronavirus closures, with the Vatican Museums welcoming a trickle of visitors to the Sistine Chapel and locals ordering their cappuccinos at outdoor tables.

While many European countries remain in hard lockdowns amid surging COVID-19 infections and variants, most Italian regions graduated to the coveted “yellow” category of risk starting Monday. That has allowed museums to reopen, sit-down restaurant and bar service to resume and many high-schoolers to return to class.

In Rome, that meant that the Vatican Museums reopened for the first time in 88 days — it’s longest closure ever. Museum director Barbara Jatta said staff took advantage of the weekslong closure to rearrange some exhibit halls and do maintenance work that would otherwise be difficult to complete with the nearly 7 million visitors who normally flock to see Michelangelo’s “Last Judgment” and Raffael masterpieces each year.

Italy, the onetime European epicenter of the outbreak, is averaging around 12,000-15,000 new confirmed cases and 300-600 COVID-19 deaths each day. But it appears to have avoided the severe post-Christmas surges in Britain and elsewhere thanks to tightened restrictions on travel and socializing over the holiday.

LISBON, Portugal — A sharp coronavirus surge in Portugal in January is showing signs of slowing down but the high number of hospitalizations continue to strain a health system already operating beyond capacity.

Portuguese authorities reported Monday 5,805 new cases —an improvement from the record figures of over 16,000 just over a week ago— and 275 more deaths for COVID-19. That brought the pandemic’s total tallies to 726,000 confirmed infections and more than 12,700 fatalities.

The southern European country continues to top the global charts with the worst 7-day rolling average of new daily infections and fatalities per 100,000 residents, according to data compiled by Johns Hopkins University.

Portugal has also been in a strict lockdown for more than a week.

SARAJEVO, Bosnia-Herzegovina — Bosnian Serb health authorities say that 2,000 Russian Sputnik V vaccines have arrived in the pro-Russian, Serb-dominated half of the country, in what is the first shipment of any vaccines to the Balkan nation.

Alen Seranic, the Health Minister of Republika Srpska, which is how the Serb-run Bosnian entity is called, says the vaccines have landed in the Bosnian capital of Sarajevo for approval by the country’s medical agency.

Bosnia’s Serbs have close political ties with Russia. The second entity, run by the country’s predominantly Muslim Bosniaks and Croats, has announced first shipments of Western-made vaccines later this month.

Seranic says health staff working with COVID-19 patients will be the first in line for vaccination. He says additional 400,000 Russian vaccines should arrive in the next two months.

JERUSALEM — Israel says it has shipped the first batch of the Moderna vaccine to the Palestinians.

The unit for Coordination of Government Activities in the Territories, or COGAT, said Monday that it coordinated a first shipment of 2,000 doses out of 5,000 doses for use by medical teams under the Palestinian Authority.

The transfer at Beituniya Crossing took place a day after Israeli Defense Minister Benny Gantz’s office announced the vaccinations had been approved for Palestinians. Israel is leading one of the world’s most successful vaccination campaigns after securing millions of doses from major drug makers Pfizer and Moderna.

International human rights groups and U.N. experts have said Israel is responsible for the well being of Palestinians living in the occupied West Bank and Gaza Strip.

Israel denies it has such an obligation. The Palestinians have not publicly requested vaccines from Israel.

PARIS — French President Emmanuel Macron urged the EU to better help its European neighbors in the race to get COVID-19 vaccines, ahead of a meeting in Paris with Serbia’s President Aleksandar Vucic.

Macron, speaking from the Elysee presidential palace, acknowledged France and Europe “could have been more present” by Serbia’s side, in an apparent response to earlier criticism from Vucic, who said last week he had been counting on a lot more support from the EU.

Serbia, which sits at the heart of the Balkans region, received doses of China’s Sinopharm that enable the country to launch its vaccination campaign earlier this month.

Macron called on the EU to be “even more efficient” and “keep accelerating things” in the coming months to provide vaccines to the population in the bloc but also to better help its neighbors.

BERLIN — German police have broken up an illegal Carnival procession in a region that currently has the country’s highest coronavirus infection rate.

Up to 90 people participated in the procession Sunday in the village of Juechsen, news agency dpa reported. Police said Monday that participants had organized the event via social media.

The Schmalkalden-Meiningen county in eastern Germany, where Juechsen is located, currently has an infection rate of some 326 new cases per 100,000 residents over seven days — Germany’s highest. The national average on Monday was 91.

Local council leader Peggy Greiser said that the event in Juechsen “is absolutely irresponsible and intolerable in view of the current serious situation.”

Germany is currently in a nationwide lockdown, its second. Its many better-known Carnival processions have been canceled.

THE HAGUE, Netherlands — The European Union’s police agency is warning nations to be on the lookout for fake COVID-19 test certificates, as crime gangs attempt to cash in on pandemic travel restrictions.

Many countries have introduced requirements for arriving passengers to show a negative COVID-19 test to slow the spread of the coronavirus brought in by people arriving from other nations.

The WHO said Monday that the PA would receive 37,440 doses of the Pfizer-BioNTech vaccine from mid-February “subject to approvals of supply agreements with manufacturers.” Those would go to frontline medical workers. It says the PA would receive another 240,000 to 405,600 AstraZeneca vaccine doses from mid- to late February subject to WHO emergency use approval.

The vaccines are being provided through COVAX, a WHO program to help poor countries acquire vaccines.

Palestinian Prime Minister Mohammad Shtayyeh told a Cabinet meeting Monday that vaccinations would begin later this month with the arrival of 50,000 doses, mostly purchased through COVAX.

JOHANNESBURG — South Africa has acquired 20 million doses of the Pfizer vaccine that are expected to arrive in the second quarter of the year, the government has confirmed.

The purchase is a significant boost to the government’s efforts to acquire vaccines to reach its goal of inoculating 40 million people, representing 67% of the country’s population, this year.

The cost of the Pfizer vaccines will be announced at a later date by Minister of Health Zweli Mkhize, said Lwazi Manzi, spokeswoman for the health ministry.

South Africa is eagerly awaiting the arrival Monday of its first delivery of vaccines, 1 million doses of the AstraZeneca vaccine from the Serum Institute of India. That will be followed up by another 500,000 doses later this month. Those AstraZeneca vaccines will be used to inoculate frontline health workers.

In the coming months, South Africa is expecting to receive 6 million vaccine doses from the international COVAX facility, 9 million of the Johnson & Johnson vaccine when it is approved, and an additional 20 million from the African Union’s vaccine acquisition task team.

BERLIN — Germany’s health minister wants to press ahead with securing coronavirus vaccine supplies for 2022, preferably at the European Union level but if necessary nationally.

Jens Spahn said Monday that it’s important to secure production capacity in Germany and Europe in advance. He said it’s not yet clear whether or when booster vaccinations will be required, or whether vaccines will need to be adapted to new virus mutations.

He spoke at a videoconference in which German-based pharmaceutical giant Bayer, which last month announced it was linking up with German company CureVac to help develop and distribute that firm’s prospective COVID-19 vaccine, said it will help produce the vaccine.

CureVac’s vaccine contender is in advanced stages of development.

The German government faces criticism for the sluggish start to the country’s vaccination campaign. The European Union, which has ordered vaccines for the entire 27-nation bloc, its also facing criticism.

TOKYO — A Japanese vice education minister has been dismissed from his Cabinet post over his recent visit at an expensive Tokyo hostess club, defying an ongoing coronavirus state of emergency.

Taido Tanose told reporters Monday that Prime Minister Yoshihide Suga reprimanded and dismissed him as vice education minister over the hostess bar visit. He then submitted his resignation from the ruling Liberal Democratic Party, along with two other senior LDP lawmakers who were clubbing with him.

The four lawmakers defied an ongoing coronavirus state of emergency request for the people to restrain nightlife and bar visits, and for restaurants to close early.

Suga on Jan. 7 placed the Tokyo region — and added seven other urban prefectures a week later — under a state of emergency through Feb. 7. Japan has seen about 5,700 virus deaths.

CANBERRA, Australia — Australia’s prime minister says he expects all Australians will have been offered a free COVID-19 vaccine by October, but has no timeline yet for sharing vaccines with Southeast Asian and South Pacific island neighbors.

Prime Minister Scott Morrison told the National Press Club of Australia that his government has secured 140 million vaccine doses, enough to cover its population of 26 million “several times over.”

He said Foreign Minister Marise Payne and Minister for International Development and the Pacific Zed Seselja were working with the leaders of Australia’s developing neighbors to share vaccines.