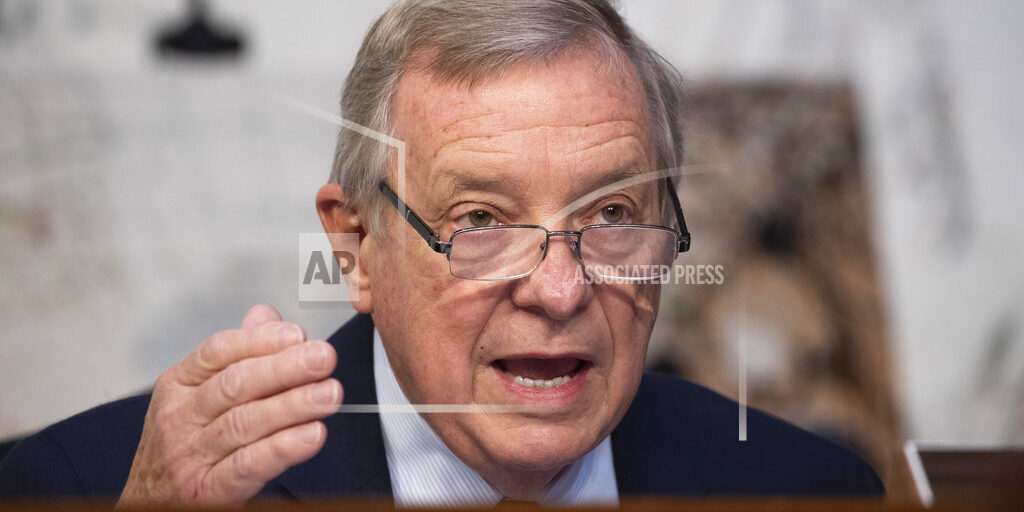 The Illinois Democrat didn’t specifically say he meant President Donald Trump in Barrett’s confirmation hearing Wednesday. But he said earlier on CNN that “orange cloud” hanging over the nomination was related to Trump and the Republican president’s Tweets.

Barrett was nominated by Trump just days after the Sept. 18 death of Justice Ruth Bader Ginsburg. Durbin says that Trump has made clear he wishes to undo the Affordable Care Act and that those wishes are also a cloud over Barrett’s nomination.

Barrett has said she is not “hostile” to the Affordable Care Act and has promised to hear all arguments.

Republican senators are moving at a break-neck pace to confirm Barrett before the Nov. 3 election. Democrats say the process is being rushed.

HERE’S WHAT YOU NEED TO KNOW ABOUT THE BARRETT HEARINGS:

Supreme Court nominee Amy Coney Barrett is back on Capitol Hill for Day Three of her confirmation hearings. Senators are digging deeper into her outlook on abortion, health care and a potentially disputed presidential election.

— Takeaways: Barrett is reticent as Democrats focus on health care.

Republican Sen. Chuck Grassley of Iowa and Democratic Sen. Patrick Leahy of Vermont have asked all recent nominees to the court whether they would favor live or same-day broadcasts of arguments. Previous nominees have also expressed openness but have cooled to the idea once they became justices.

The court has been providing live audio of arguments, held by telephone, since May due to the coronavirus pandemic — the first time it has done so. Grassley and Leahy are longtime members of the Senate Judiciary Committee and introduced legislation earlier this year to continue the practice.

While questioning Barrett on Wednesday, the 87-year-old Grassley joked it probably wouldn’t happen in his lifetime. But he says allowing cameras in the courtroom “can bring about a better understanding of the judiciary.” Leahy also urged Barrett to consider it during his round of questioning.

Republicans want to confirm Barrett before the presidential election. Democrats say Republicans are rushing the process.

Senate Judiciary Committee Chairman Lindsey Graham says the nomination of Amy Coney Barrett to the Supreme Court is a signal to young conservative women who oppose abortion that there’s “a seat at the table for them.”

Opening the second day of questioning on Wednesday, the South Carolina Republican told Barrett she has been “candid to this body about who you are, what you believe” and this is the first time a woman who is “unashamedly pro-life and embraces her faith without apology” has been nominated to the Supreme Court.

Graham says he’s “never been more proud” of a nominee.

While Barrett has repeatedly declined during her confirmation hearings to say how she would rule on abortion, senators have been clear in their questioning that they know she is opposed to it.

Barrett is the most openly anti-abortion nominee to the Supreme Court in decades. Democrats have warned her confirmation could lead to the overturning of the landmark abortion case Roe v. Wade.

Supreme Court nominee Amy Coney Barrett is back before the Senate Judiciary Committee to face more questions from senators at her confirmation hearing.

Tuesday’s session lasted nearly 12 hours. Barrett declined to voice an opinion on potential election-related litigation involving President Donald Trump or presidential transition of power. She also said she didn’t view the 1973 Roe v. Wade decision that affirmed the right to abortion as an inviolable “super-precedent” that couldn’t be overturned.

On the Obama-era Affordable Care Act, which provides health care for more than 20 million people and comes before the court next month, Barrett says she doesn’t recall seeing Trump’s statements that he planned to nominate justices who would repeal the law.

The committee is scheduled to take a preliminary vote on her nomination on Thursday. The GOP-controlled Senate is expected to confirm her before Election Day. Barrett would replace the late Justice Ruth Bader Ginsburg, shifting the court’s 5-4 conservative majority to 6-3.