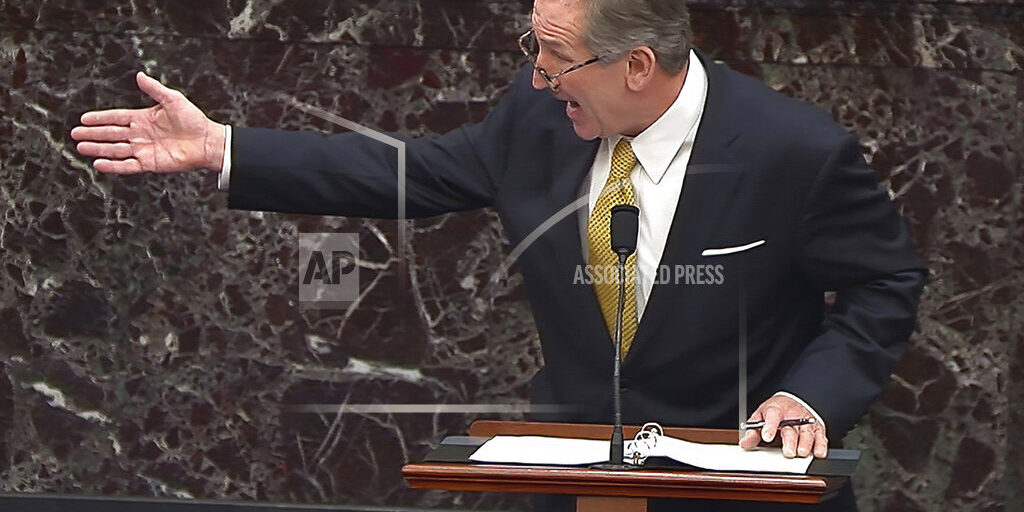 Donald Trump’s lawyers are arguing that his words to his supporters who attacked the U.S. Capitol – to “fight like hell” – are common political rhetoric, using a video montage to show almost every single Senate Democrat using the word “fight” in political speeches.

Once the video finished, lawyer David Schoen pointed at both the senators and the impeachment managers and told them to “stop the hypocrisy.” The Democratic prosecutors have argued that Trump’s supporters were primed for violence on Jan. 6, the day of the attack, and that he egged them on with “obvious intent” before they interrupted the electoral count of votes. Five people died in the chaos.

The lawyers followed that with additional videos of Democrats praising protests after the death of George Floyd in Minnesota last year and also challenging the elections of previous Republican presidents. Trump’s supporters attacked the Capitol after he falsely said for months that the presidential election was stolen.

The strategy from Donald Trump’s lawyers is to concede that violence at the U.S. Capitol on Jan. 6 was every bit as traumatic, unacceptable and illegal as Democrats say. But his team disputes that Trump had anything to do with it. The goal is to blunt the impact of the House Democrats’ visceral case and quickly pivot to what the defense lawyers see as the more winnable issue of the trial: whether Trump incited the deadly riot.

— Trump team’s objective is to not lose any Republican votes

Donald Trump’s lawyers have opened their arguments in the former president’s impeachment trial with a direct attack on Democrats.

Arguing that Trump did not incite the Jan. 6 insurrection of his supporters at the U.S. Capitol, lawyer Michael van der Veen said that the trial is “constitutional cancel culture” by Democrats trying to retain power. He played a video of Democrats calling for protests after Black men and women were killed by police officers and objecting to Trump’s election in 2017.

Trump’s supporters violently attacked the Capitol last month after he falsely claimed the presidential election was stolen from him for months and then told them to “fight like hell” as Congress counted the votes.

The lawyers are arguing that the trial is unconstitutional, that Trump is protected by freedom of speech and that he did not intend to incite the deadly riot.

Van der Veen said the case “poses a serious threat to freedom of speech for political leaders of both parties at every level of government.”

Defense lawyers have begun their opening arguments in the impeachment trial of Donald Trump as the case speeds to an expected conclusion this weekend.

The Trump legal team is expected to argue that the former president did not incite the Jan. 6 riot at the U.S. Capitol and that his speech was protected by the First Amendment. The lawyers have also raised questions about the trial’s constitutionality because Trump is no longer in office.

Trump’s lawyers are not expected to use anywhere close to their allotted time and will wrap up their arguments later Friday. After that, senators who are serving as jurors will have an opportunity to ask questions of lawyers for both sides, followed by closing arguments.

The case is likely to conclude as soon as Saturday.

House prosecutors at former President Donald Trump’s second impeachment trial relied on emotion and violent images on video to make their case in arguments over the past two days.

The Senate trial is shifting to Trump’s defense lawyers on Friday, and they’re prepared to acknowledge that the violence at the U.S. Capitol on Jan. 6 was every bit as traumatic, unacceptable and illegal as Democrats say.

But Trump’s lawyers plan to say Trump had nothing to do with it. They want to pivot to what they see as the core and more winnable issue of the trial: whether Trump can be held responsible for inciting the deadly riot.

The argument is likely to appeal to Republican senators who themselves want to be seen as condemning the violence without convicting the former president.

Donald Trump’s lawyers have a simple objective as they open their defense at the former president’s impeachment trial: Don’t lose any Republican votes.

Most Republican senators have indicated they’ll vote to acquit Trump on the House charge of incitement of insurrection. They say the trial is unconstitutional and that Trump didn’t incite supporters to lay siege on the U.S. Capitol on Jan. 6 when he told them to “fight like hell” against the certification of Joe Biden’s White House victory.

If Republicans hold the line, Democrats will fall well short of the two-thirds of the Senate needed for conviction.

Trump’s two top lawyers, Bruce Castor and David Schoen, risked losing one Republican vote on Tuesday after Louisiana Sen. Bill Cassidy said they did a “terrible” job arguing that the trial is unconstitutional.

Cassidy, who had voted with his party two weeks earlier to stop the trial, switched his vote to side with Democrats.

Bruce Castor, is a onetime rising-star prosecutor from suburban Philadelphia, had burned bridges with much of the Republican establishment after a series of election losses. And he’d pretty much stayed out of sight.

But he’s made a comeback as one of Donald Trump’s lawyers at the former president’s impeachment trial.

Castor’s moment in the national glare on Tuesday was seen as a rambling and at times aimless hourlong presentation in search of a point.

He’s getting a chance to make a different impression when he begins to present Trump’s defense on Friday.