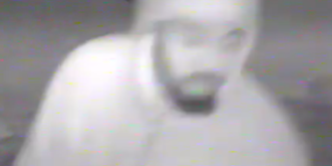 (KTRS) St. Louis Police detectives are asking for the public’s help in identifying a robbery suspect. The robbery occurred on Sunday February 16 at approximately 10:40 pm at the Square One Brewery at 1727 Park. The suspect is described as a black male, late 20’s to mid 30’s 5’8″-6″0″ 250 lbs with a dark complexion and full beard. He was wearing a Rams hooded jacket with a white t-shirt, blue jeans and dark tennis shoes. After announcing the robbery, the suspect claimed he had a gun, but did not display one. The suspect took money and fled the scene on foot. Anyone with a tip who wants to remain anonymous and is interested in a reward can contact CrimeStoppers at 866-371-TIPS (8477).