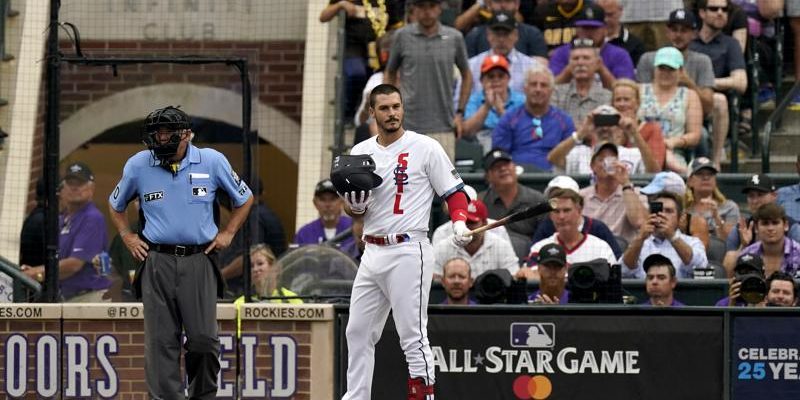 DENVER (AP) — Nolan Arenado jogged out of the dugout and tipped his cap to a cheering crowd at his former home stadium.

That tribute meant a lot.

From there, the cheers were few and far between for Arenado and his National League buddies in a 5-2 loss to the American League contingent during the All-Star Game at Coors Field on Tuesday night. It was the eighth straight loss by the NL.

“AL’s awesome,” Boston right-hander Matt Barnes cracked of the winning streak. “I might be biased because I’ve only ever played in the American League. Honestly, I have no idea. Sometimes there are crazy anomalies in sports like that, that have no rhyme nor reason. We have a really good ballclub out there. We really do.”

The NL went 0 for 4 with runners in scoring position and left eight on base.

“Unfortunately, I’m a part of three of them,” NL manager Dave Roberts said of the losing streak. “Not ideal but I hope I get a chance to win one next year.”

It would be fitting for the Dodgers skipper.

Next season, the game will held be at Dodger Stadium — a makeup from 2020 when the All-Star Game was canceled after the season’s start was delayed due to the coronavirus pandemic.

Arenado was the fan favorite as the crowd of 49,184 showered him with applause when he came out of the dugout and again when he did an on-field interview at his customary spot — third base. He spent eight seasons in Denver before being traded to the St. Louis Cardinals in the offseason.

He appreciated the kind reception. He’s always appreciated his time in the Mile High City even as things turned sour between him and the front office.

“Sometimes when you do good work, sometimes it doesn’t get noticed. Sometimes you want to be appreciated for what you did,” said Arenado, an eight-time Gold Glove winner while in Colorado.

Arenado finished 0 for 2 at the plate. Couple that with his 2-for-14 showing in his return to Coors Field earlier this month and it hasn’t been a very memorable homecoming.

Except for the thundering ovations.

“I won’t be getting any standing ovations anywhere else anymore,” Arenado said. “I’m not too worried about those anymore. It was awesome. I loved it. I don’t take it for granted.”

It just wasn’t the NL’s night on the field.

That was illustrated in the eighth with two outs and the bases loaded. On a 3-0 pitch, Cubs slugger Kris Bryant sent a sinking liner to left that looked destined for a hit — until Jared Walsh made a shoestring catch.

In the ninth, Omar Narváez started the inning off with a single. On a pitch that bounced to the backstop, he tried to go to second but the ball hit off the concrete behind home and straight to catcher Mike Zunino, who threw out Narváez.

Early on, there was nearly a scary scene: Starter Max Scherzer almost getting hit in the head by a liner off the bat of Vladimir Guerrero Jr.

“I’m alive and I don’t get hit by a ball. That’s the success story,” Scherzer said. “When that ball came screaming back at me, that’s your worst nightmare. That’s every pitcher’s worst nightmare.”

“I kind of knew that could happen if you threw down and away against him and that ball was right back in my face. Thankfully, I still have a blue eye and brown eye.”