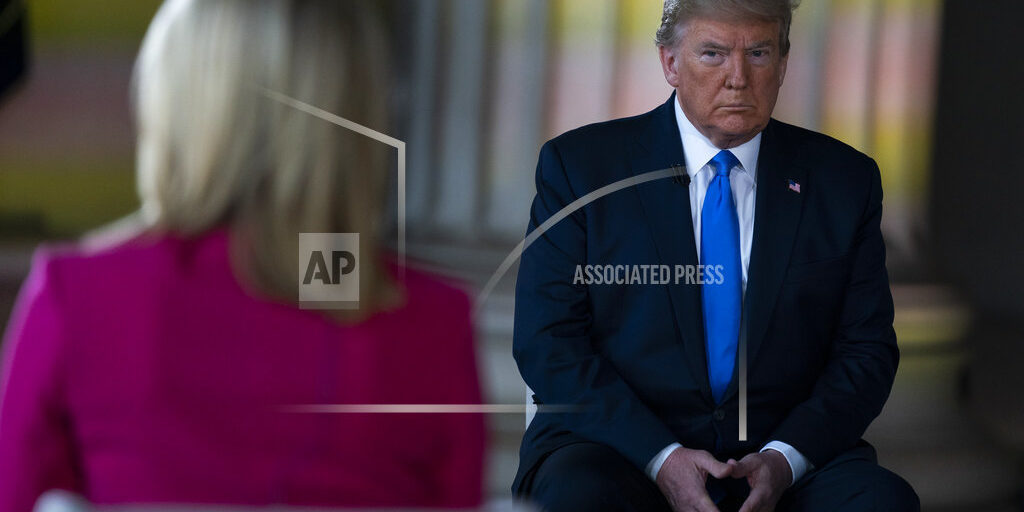 Washington D.C. (AP) The Trump administration is making ever louder pronouncements casting blame on China for the COVID-19 pandemic, aiming to sidestep domestic criticism of the president’s own response, tarnish China’s global reputation and give the U.S. leverage on trade and other aspects of U.S.-China competition.

President Donald Trump has vowed to penalize China for what U.S. officials have increasingly described as a pattern of deceit that denied the world precious time to prepare for the pandemic. The opening salvo isn’t in the form of tariffs or sanctions, but in a one-sided accounting of China’s behavior that could yank the Chinese lower on the global reputation meter.

The State Department, the Department of Homeland Security and the White House have all launched public efforts in recent days to lay bare what they say is clear evidence that China tried to mask the scale of the outbreak and then refused to provide critical access to U.S. and global scientists that could have saved lives. More than 250,000 people have died globally from COVID-19, including more than 68,000 in the U.S.

The Trump administration, a senior administration official says, is trying to convince the world that China isn’t playing by the same rules as everyone else, and that may be the biggest punishment for an intensely proud emerging superpower. The official was not authorized to publicly discuss the issue and spoke only on condition of anonymity.

To that end, the administration has pushed its China criticism beyond the bounds of established evidence.

Trump and allies repeat and express confidence in an unsubstantiated theory linking the origin of the outbreak to a possible accident at a Chinese virology laboratory. U.S. officials say they are still exploring the subject and describe the evidence as purely circumstantial. But Trump, aides say, has embraced the notion to further highlight China’s lack of transparency.

Secretary of State Mike Pompeo told ABC’s “This Week with George Stephanopoulos” that there is “enormous evidence” that the virus began in the Wuhan Institute of Virology.

The institute, which is run by the Chinese Academy of Sciences, is about 8 miles, or 13 kilometers, from a market that is considered a possible source for the virus. It has done groundbreaking research tracing the likely origins of the SARS virus, finding new bat viruses and discovering how they could jump to people.

Pompeo said China has denied the U.S. and World Health Organization access to the lab. But Trump says he has seen information that gives him a high degree of confidence that the Wuhan institute is the origin of the virus. Asked why he has such confidence, Trump said: “I can’t tell you that. I’m not allowed to tell you that.”

“From our perspective, this remains speculative,” WHO emergencies chief Dr. Michael Ryan says of the lab theory. “But like any evidence-based organization, we would be very willing to receive any information that purports to the origin of the virus.”

Trump’s ouster of more than a handful of top intelligence officials has given him an additional credibility problem when it comes to the administration’s pronouncements based on intelligence.

“These purges have already, I fear, politicized the intelligence community’s work in key ways,” said Mike Morell, a former acting CIA director under President Barack Obama who now hosts the “Intelligence Matters” podcast. One of our institutions critical to the pursuit of the truth has a large crack in it.”

On Monday, China’s official Global Times newspaper said Pompeo was making “groundless accusations” against Beijing by suggesting the coronavirus was released from a Chinese laboratory.

The populist tabloid published by the ruling Communist Party mouthpiece People’s Daily said the claims were a politically motivated attempt to preserve Trump’s presidency and divert attention from the U.S. administration’s own failures in dealing with the outbreak.

While Trump’s and Pompeo’s critical statements have been at the forefront of the administration’s anti-China rhetoric, U.S. government agencies, including the State Department and the Department of Homeland Security, have been compiling often publicly available information to try to support the allegations.

DHS documents, obtained by The Associated Press on Sunday and Monday, accuse the Chinese government of intentionally downplaying the scope and severity of the spread of the virus in order to buy up international stocks of personal protective equipment and other medical supplies needed to combat the disease.

Although any country might be expected to purchase large quantities of materials necessary to combat a major threat to public health, the administration has sought to portray China’s actions as secret, irresponsible and dangerous for the rest of the world.

One such document, drawing from open source material, emphasizes reports about the disappearance of Chinese doctors who raised early alarms about the virus and the response, the Chinese government’s alleged suppression and destruction of virus samples and closure of relevant laboratories.

It also reports on China’s early resistance to acknowledging human-to-human transmission of COVID-19, the failure of authorities to immediately block domestic or international travel out of Wuhan and China’s opposition to calls for an international inquiry into the pandemic.

The focus on China comes as Trump’s own record has faced persistent scrutiny. White House press secretary Kayleigh McEnany, told the AP on Monday that Trump was first briefed by intelligence agencies about the virus on Jan 23, and then again on Jan 28.

Providing a rare glimpse into one of the most sensitive U.S. government practices, the highly classified presidential daily briefing, McEnany said it was only in that second briefing that Trump was told that the virus was spreading outside China.

Trump, she added, was told that all the deaths were still occurring inside China and that Beijing was not sharing key data. Days later, Trump moved to severely curtail travel to the U.S. from China. The White House’s descriptions of the briefing were prepared by the Office of the Director of National Intelligence, a spokesperson said.

But reference to the coronavirus was included in at least passing mention in the written version of the intelligence briefing on Jan. 11 and Jan. 14, according to a senior U.S. government official within the intelligence community, who said that other officials, including Defense Secretary Mark Esper, were briefed.

Officials emphasized that much of the U.S. government’s attention during that period was on Iran, after the killing of Islamic Revolutionary Guard Corps Gen. Qasem Soleimani in a Jan 3 U.S. drone strike and the subsequent downing of Ukrainian airliner over Tehran.