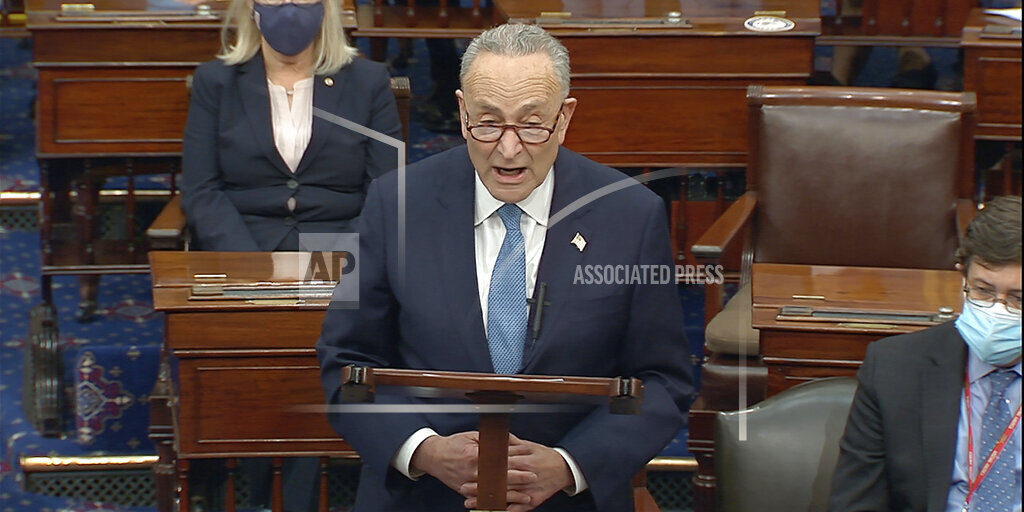 WASHINGTON (AP) — The Latest on Congress’ confirmation of Joe Biden as winner of the presidential election (all times local):

Senate Democratic leader Chuck Schumer is calling on President Donald Trump’s Cabinet to remove him from office following Wednesday’s violent assault on the Capitol by the president’s supporters.

In a statement Thursday, Schumer said the attack on the Capitol “was an insurrection against the United States, incited by the president.” He added, “This president should not hold office one day longer.”

Schumer said Vice President Mike Pence and the Cabinet should invoke the 25th Amendment and immediately remove Trump from office. He added, “If the vice president and the Cabinet refuse to stand up, Congress should reconvene to impeach the president.”

Wolf says he has condemned violence on both sides of the political aisle, specifically directed at law enforcement. He tweets “we now see some supporters of the President using violence as a means to achieve political ends.” He calls that unacceptable.

Wolf also assures that he plans to stay on as acting secretary until the end of the Trump administration to ensure the Department of Homeland Security remains focused on “the serious threats facing our country and an orderly transition to President-elect Biden’s DHS team.”

Wolf’s statement also came out on the morning that the White House sent out a notice officially withdrawing his nomination as DHS secretary.

But White House spokesman Judd Deere says the withdrawal occurred on Wednesday and was not related at all to that day’s events at the Capitol or the acting secretary’s comments Thursday morning.

Deere says Wolf remains the acting secretary and continues to perform the duties of his office.

Army Secretary Ryan McCarthy says a 7-foot non-scalable fence will be erected around the Capitol grounds in the wake of the storming of the Capitol by supporters of President Donald Trump.

McCarthy said the fencing would be up for a minimum of 30 days.

That period encompasses the Jan. 20 inauguration of President-elect Joe Biden.

MCarthy spoke at a news conference with D.C. officials.

HERE’S WHAT YOU NEED TO KNOW ABOUT CONGRESS’ CONFIRMATION OF BIDEN’S VICTORY:

Angry supporters of President Donald Trump stormed the U.S. Capitol on Wednesday in a chaotic protest aimed at thwarting a peaceful transfer of power, forcing lawmakers to be rushed from the building and interrupting challenges to Joe Biden’s Electoral College victory. Congress returned later Wednesday to resume their proceedings after the Capitol was cleared by law enforcement and confirmed Biden as the presidential election winner.

— A moment in America, unimaginable but perhaps inevitable

— Capitol has seen violence over 220 years, but not like this

Republican Illinois Congressman Adam Kinzinger is calling on President Donald Trump’s Cabinet to invoke the 25th Amendment and remove him from office.

Kinzinger made the remarks Thursday in a video posted to Twitter, responding to the violent mob that stormed Congress on Wednesday in an attempt to stop the certification of President-elect Joe Biden’s win over Trump.

He went on to say Trump “must now relinquish control of the executive branch voluntarily or involuntarily.”

The chief of the U.S. Capitol Police says the violent mob that stormed the building wielded metal pipes, chemical irritants and other weapons against law enforcement.

A Capitol Police officer shot and killed one person, who Sund identified as Ashli Babbitt. Sund did not identify the officer but said they would be placed on administrative leave pending an investigation.

Sund defended his agency’s response from criticism that officers did not stop the incursion. He says his agency “had a robust plan” for what he anticipated would be peaceful protests, but what occurred Wednesday was “criminal riotous behavior.”

The top U.S. military commander for Africa has issued a message of assurance to his forces, saying that America, its Constitution and system of government remain strong despite the violent events at the U.S. Capitol.

Army Gen. Stephen Townsend tweeted Thursday that America has “withstood much greater and graver challenges in the past” and Africa Command remains focused on its mission.

“The American people expect, and need, us to stay steady and keep clear eyes on our duty — and we will,” said Townsend in a statement with his senior enlisted leader, Sgt. Maj. Richard Thresher.

While the statement appears to be directed to his Africa Command forces, it clearly serves as a message across Europe and Africa to America’s allies who watched in horror as armed and angry protestors took over the U.S. Capitol on Wednesday. Africa Command is based in Germany.

Former Attorney General William Barr says President Donald Trump’s conduct as a violent mob of his supporters stormed the U.S. Capitol was a “betrayal of his office and supporters.”

In a statement to The Associated Press, Barr said Thursday that “orchestrating a mob to pressure Congress is inexcusable.”

Barr was one of Trump’s most loyal and ardent defenders in the Cabinet.

His comments come a day after angry and armed protesters broke into the U.S. Capitol, forcing Congress members to halt the ongoing vote to certify President-elect Joe Biden’s election and then flee from the House and Senate chambers.

Barr resigned last month amid lingering tension over the president’s baseless claims of election fraud and the investigation into Biden’s son.

The Defense Department has formally activated roughly 6,200 members of the National Guard from six northeastern states to help support the Capitol Police and other law enforcement in Washington in the wake of the deadly riot Wednesday that rocked the U.S. Capitol.

Acting Defense Secretary Christopher Miller signed orders activating the National Guard from Virginia, Pennsylvania, New York, New Jersey, Delaware and Maryland for up to 30 days. A defense official said the goal is to have Guard members help secure the U.S. Capitol and the surrounding area through the Jan. 20 inauguration of President-elect Joe Biden.

The Guard members are arriving over the next several days. A total of 6,200 have been activated, but the exact number of troops that will actually get to the city may be less than that, depending on who is available in each state. The Guard won’t be armed, but will have riot gear and protective clothing, said the official, who spoke on condition of anonymity to provide troop details.

The orders come a day after angry and armed protesters broke into the U.S. Capitol, forcing Congress members to halt the ongoing vote to certify Biden’s election and then flee from the House and Senate chambers.

Four people died in the melee, including a protester who was shot by police. The vote was later completed after the building was cleared.

President Donald Trump’s former acting White House chief of staff resigned his post as special envoy to Northern Ireland on Thursday, saying “I can’t do it. I can’t stay.”

Mick Mulvaney joined a growing list of Trump administration officials who are leaving following the violent riot at the Capitol on Wednesday. The riot occurred after Trump addressed a massive rally in Washington fueled by the president’s repeated allegations that he lost the November election because of election fraud, which is not substantiated. A mob breached the Capitol building just as lawmakers were working to certify Electoral College votes in the election, sealing President-elect Joe Biden’s victory.

Mulvaney said he called Secretary of State Mike Pompeo Wednesday night to tell him that he was resigning. He served as acting White House chief of staff from January 2019 until March 2020. Before that, he was director of the Office of Management and Budget.

“I can’t do it. I can’t stay,” Mick Mulvaney told CNBC, which was first to report the resignation. “Those who choose to stay, and I have talked with some of them, are choosing to stay because they’re worried the president might put someone worse in.”

President Donald Trump now says there “will be an orderly transition on January 20th” after Congress concluded the electoral vote count certifying President-elect Joe Biden’s victory and after a day of violence when his supporters stormed the U.S. Capitol.

Trump says in a statement tweeted by his social media director Dan Scavino, “Even though I totally disagree with the outcome of the election, and the facts bear me out, nevertheless there will be an orderly transition on January 20th.”

He adds: “I have always said we would continue our fight to ensure that only legal votes were counted. While this represents the end of the greatest first term in presidential history, it’s only the beginning of our fight to Make America Great Again.”

Trump has spent the last two months refusing to concede the election and making baseless allegations of mass voter fraud that have been rejected by dozens of courts and Republican officials, including his former attorney general.

The House and Senate certified the Democrat’s electoral college win early Thursday after a violent throng of pro-Trump rioters spent hours Wednesday running rampant through the Capitol. A woman was fatally shot, windows were bashed and the mob forced shaken lawmakers and aides to flee the building, shielded by Capitol Police.

The rampage began shortly after President Donald Trump repeated his unfounded claims of election fraud to thousands of rallying demonstrators he’d invited to Washington. Many then surged to the Capitol after he incited them to go there as lawmakers debated the electoral votes.

More than six hours after the violence erupted, lawmakers resumed their session.

The assault on the Capitol made some Republicans squeamish about trying to overturn Biden’s win, and challenges were lodged only against Arizona and Pennsylvania. Both efforts lost overwhelmingly.

Biden defeated Trump by 306-232 electoral votes and will be inaugurated Jan. 20.