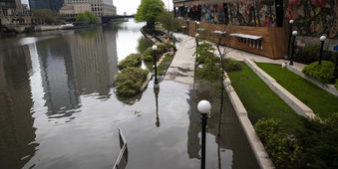 EDENVILLE, Mich. (AP) — People living along two mid-Michigan lakes and parts of a river have been evacuated following several days of heavy rain that produced flooding and put pressure on dams in the area. Two Midland-area schools were opened Tuesday morning for evacuees and more than 50 roads have been closed. Volunteers at the schools said about 120 vehicles were in the parking lots and about 30 people had been staying on cots inside. The evacuations in Michigan followed days of heavy rains in parts of the Midwest that also brought flooding to Chicago and other parts of Illinois, as well as Ohio and other states.

US Easing Virus Restrictions for Foreign Flights to America
September 21, 2021