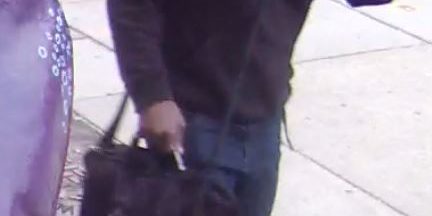 ST. LOUIS (KTRS) — CrimeStoppers along with MetroLink and the City of St. Louis is offering a $25,000 reward for information leading to the arrest of a suspect in a homicide at the Delmar MetroLink station Sunday morning. St. Louis Metropolitan Police say the incident occured around 10 a.m. at the station in the 700 block of Hoidamont. James Cook, 30, of the 700 block of Monte Vista Dr. was pronounced dead at the scene.

Authorities say the suspect pictured above is believed to be a black male in his forties who was wearing a black hooded sweatshirt with orange lettering that may reference a football team. He was also wearing dark pants, a stocking cap with gray hair protruding from it, had a graying beard and mustache, and was carrying a black computer type bag with a strap. The suspect is armed with a pistol and is believed to frequent Metro transit.

Anyone with information is asked to call CrimeStoppers at 866-371-TIPS (8477) or text to 274637. All tips will remain anonymous and only tips directly submitted to CrimeStoppers are eligible for the full $25,000 reward.